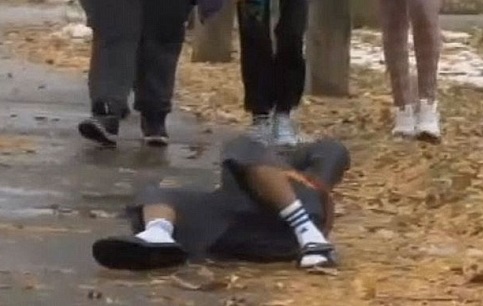 Cleveland officer shot a 12-year-old boy  outside a city recreation center late Saturday afternoon after the boy pulled a fake gun from his waistband, according to police.

When a 911 call was made around 3:00 p.m. about a black male with a gun Police responded to. A caller told Dispatcher, “I’m sitting in the park…there’s a guy in here with a pistol, and it’s probably a fake one, but he’s pointing it at everybody”.
The caller twice said the gun was “probably fake” and told dispatchers the person pulling the gun from his waistband was “probably a juvenile,” according to audio released by police officials late Saturday.

“The guy keeps pulling it in and out…it’s probably fake, but he’s scaring the s*** out of people,” he added. the rookie officer saw a black gun sitting on the table, and he saw the boy pick up the gun and put it in his waistband, Cleveland Police Patrolmen’s Association President Jeffrey Follmer said.

When the officer got out of the car, he told the boy to put his hands up.

That’s when the boy reached into his waistband, pulled out the BB gun and the rookie officer fired two shots.

The child did not threaten the officer verbally or physically. The weapon was not pointed at police officers.

The child was shot in the stomach and transported to a local hospital. He’s listed in serious condition.

The boy  whose name has not been officially released died early Sunday morning, a police union official confirmed.