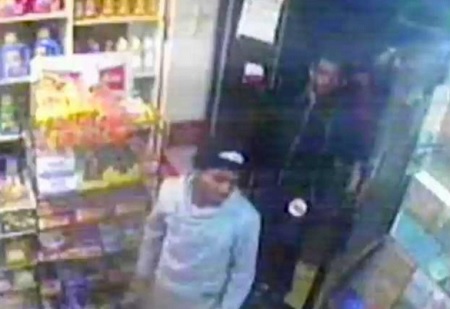 Four teenagers suspected of taking turns raping an 18-year-old woman at gunpoint at a Brooklyn playground after ordering her father to leave her side were taken into custody on Sunday, the police said.

The brazen attack on Thursday night, which the police said was carried out by the four teenagers along with another young man who remains at large, set off waves of fear and uncertainty in the Brownsville neighborhood where it happened. Elected officials also questioned whether the police notified the public quickly enough after the attack, a suggestion that the Police Department strongly contested.

Two teenagers, ages 14 and 15, were turned in to police custody by their parents; the two others, ages 15 and 17, were apprehended by the authorities, the police said. Charges against them were pending.

The developments came a day after the police released a surveillance video of the young men entering a deli before the rape. The woman’s father went to summon help when he was driven away, but before he could return with police officers the young men had run off into the darkness.

“It forces you to think differently about your own neighborhood,” said Alethea Pierce, who has lived in the area for 43 years.

The police said five young men, one of them armed, walked up to the father and daughter at Osborn Playground at around 9:10 p.m. on Thursday. The father and daughter told the police they had been at the playground drinking beer, a Police Department official said on Sunday, speaking on the condition of anonymity to discuss a continuing investigation.

Many questions about the assault and its aftermath remained difficult to account for. The father ran to get help, but the police official said it took him nearly 20 minutes to come upon two officers in a patrol car. By the time the father returned to the playground with the officers, the young men had each raped the woman and fled, the official said.

The Fire Department said a call came in requesting medical help at 9:26 p.m., roughly 16 minutes after the attack started.

In an area filled with public housing high-rises, delis and other stores, it is unclear why the father was not able to get help from bystanders or call the police. The Police Department said in a statement on Sunday night that no one called 911 in connection with the attack, and that the officers “immediately responded and located the victim” after being alerted by the father. They then called for a supervisor and an ambulance, which took the woman to Kings County Hospital Center for treatment. “There was no delay in the police response,” the statement said.

Without other witnesses, investigators began canvassing the area on Friday for video, starting with subway stations and businesses and expanding outward, the police official said. They also conducted a second, more detailed interview with the woman. On Saturday afternoon, investigators found the surveillance video that they released, along with a public notice about the episode, that night.
Photo
Eric L. Adams, the Brooklyn borough president, said the Police Department should have released details about the attack earlier.