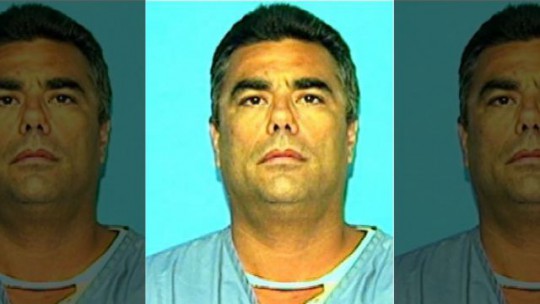 A once-convicted felon Florida Man killed six of his grandchildren, including an infant, his adult daughter and himself in a shooting at the man’s home in a small North Florida town Thursday, a sheriff said.

Gilchrist County Sheriff Robert Schultz at a news conference identified the shooter as 51-year-old Don Spirit. He would not say if the woman killed was the mother of any of the two boys and four girls, some of whom spent a lot of time at the rural home.

Schultz said a deputy who arrived after Spirit called 911 to say he might harm himself and others made contact with the man, who then committed suicide. Authorities then found the other seven bodies.

At a later news conference, Schultz released the names of the victims. They were Sarah Lorraine Spirit, 28; Kaleb Kuhlmann, 11; Kylie Kuhlmann, 9; Johnathon Kuhlmann, 8; Destiny Stewart, 5; Brandon Stewart, 4; and Alanna Stewart, who was born in June.

Schultz said Spirit was the only suspect and that some people were left alive at the home. Schultz also said Spirit had a criminal history. According to the Florida Department of Corrections website, Spirit was released from prison in February 2006 for a gun charge.

According to an online story in 2003 by the Orlando Sentinel, a 40-year-old Don Spirit pleaded guilty to possession of a firearm by a convicted felon in the fatal shooting of his 8-year-old son, Kyle, in a 2001 hunting accident. He was sentenced to three years in prison and was emotional about the shooting at his hearing.

The story said that on a walk through the woods with Kyle and an older son, Spirit pointed out rust on the muzzle of his rifle. The rifle fired, hitting Kyle in the head, according to the Osceola County Sheriff’s Office. Spirit was convicted in 1998 for felony possession of marijuana, according to a charging affidavit.

Schultz wouldn’t say if a weapon was recovered or what sort was used. He didn’t have a motive but said deputies had been to the home in the past for various reasons.

“There’s still a lot of unanswered questions. There’s going to be questions that we’re never going to get answered,” he said.

He wouldn’t divulge where exactly the victims were found, though he said, “They were certainly all over on the property.”

Police had cordoned off the length of a dirt road leading to the home near Bell, a town of just 350 people about 30 miles west of Gainesville.

“Keep this community in your prayers,” Schultz said. “Tomorrow’s going to be a hard day in Gilchrest County.”

Bell resident Daniel Barry was trying to absorb the loss in the rural community west of I-75.

“It’s tragic, the kids. Even if there were family problems, why involve the kids?” he said outside a convenience store. “It’s enough that he took his daughter’s life, but his grandkids, too? It’s surreal.”