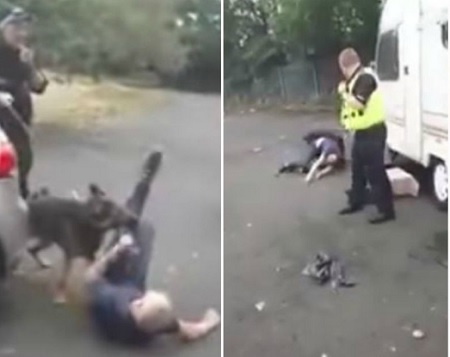 Disturbing video captures a traveller was dragged across the ground when he was apparently mauled by a police dog.
Mobile phone video appears to show the man, named in reports as Andy Cash, on the floor with the force dog clamped to his leg.

Witnesses claimed children were crying as Mr Cash is seen trying to defend himself while a policeman attempts to drag the dog away.

He is later seen handcuffed and receiving treatment as blood pours from his leg. Mr Cash claimed he has undergone surgery and may need another operation.

Accused of stealing roof tiles from a golf course

Tags: A Traveller Was Dragged Across The Ground, Man Mauled By A Police Dog