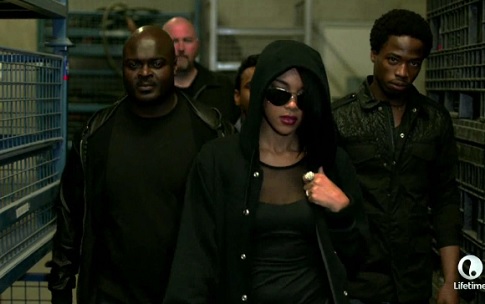 Even if you’re not an Aaliyah fan, you’ve probably heard of the controversy surrounding Lifetime’s biopic about the late singer. The press surrounding the film from the moment it was announced centered on Aaliyah’s family’s disapproval and Lifetime losing the rights to use most of Aaliyah’s original music.

If that wasn’t a red flag to producers, having their first star — Disney Channel’s Zendaya — drop out of the project because she didn’t think the story was being handled delicately should have been. Yet, here it is. The film recast Alexandra Shipp in its title role and is as teeth-gritting awkward as anyone could expect.

RELATED: ‘Aaliyah: The Princess of R&B’ hopes to ‘inspire,’ even without family’s permission

Not having the rights to the music forced Lifetime to focus on Aaliyah’s personal life, including her secret marriage to R. Kelly when she was still a teenager and he was 27. It’s a story that Aaliyah denied happening when she was alive and her family has been opposed to talking about.

Still, Lifetime covered the topic in a haphazard way. The situation was painted as star crossed lovers torn apart by her parents rather than a predator who coaxes a 15 year old girl into an illegal marriage. Her parents do force an annulment in the film, but then there is another 15 minutes showcasing Aaliyah as a lovesick teenager rather than the emerging new face of R&B.

Without access to Aaliyah’s pivotal performances, Lifetime tried to show Aaliyah’s musical prowess and business savvy through a series of meetings with record executives and talent agents. However, the two most influential people in Aaliyah’s career — Missy Elliott and Timbaland — are relegated to one scene and two mentions, despite the fact they crafted her biggest hits. They were essential in cementing Aaliyah as the “princess of R&B.” It’s also laughable that the first Missy beat Aaliyah listens to in the film is definitely from “Work It” — which Elliott released in 2002, a year after Aaliyah died.

The film goes on to dismisses Aaliyah’s soundtrack contributions without mentioning the tracks by name — yet “Are You That Somebody” (“Dr. Doolittle”) and “Try Again” (“Romeo Must Die”) are arguably the singer’s most recognized singles. They do spotlight her singing “Journey to the Past” from “Anastasia” at the Oscars — most likely because it was one of the few songs they could get rights to, but it doesn’t make sense to hardly acknowledge the other two’s existence.

The most important moments of Aaliyah’s career are handled through her giving radio interviews rather than being shown. There are random fast forwards to jump to the parts of Aaliyah’s story Lifetime was able to secure the rights to tell rather than trying to portray an accurate timeline of her career. For fans of the late singer it feels egregious and for casual watchers it’s disorienting and uncomfortable.

Aaliyah died tragically in a plane crash at the young age of 22 but it’s not her sudden death that makes Aaliyah memorable. Her short career changed the sound of modern R&B. She’s a direct influence on today’s biggest superstars, including Beyonce and Drake.

This isn’t a film that honors that legacy — and it’s not the film Aaliyah, who was painstakingly careful about her image, would have wanted made. Shipp is endearing enough, but sounds nothing like the singer. The songs they were able to use were placed in the wrong time periods of her career and overall the film comes off as sloppy at best.

When Lifetime realized they weren’t going to be able to make the movie properly, they should have let it go.