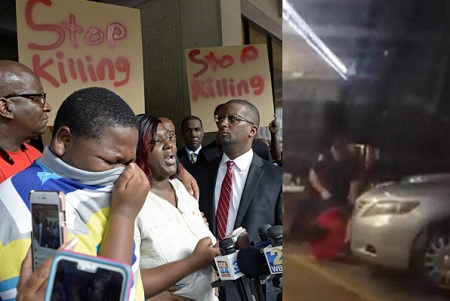 A 48 second video captured by someone in a nearby car shows 37-year-old Alton Sterling being pinned to the ground by 2 officers and shot outside a convenience store.

It begins with the camera facing the cars dashboard. Then a single pop is heard. Then someone yells, “Get on the ground.”
Another pop follows.

This clip is spreading quickly around social media, which sparked local protests and drew national attention.

Now Sterling’s family is “grieving and mourning for an unnecessary loss of life,” the attorney said.
“Alton was out there selling CDs, trying to make a living. He was doing it with the permission of the store owner, so he wasn’t trespassing or anything like that. He wasn’t involved in any criminal conduct,” Jordan said.
Abdullah Muflahi, the owner of the Triple S Food Mart, told CNN he’s known Sterling for six years.
Muflahi let him sell CDs in front of the store. He said Sterling never got into fights.
Muflahi said he saw the officers slam Sterling on a car.
“They told him not to move,” he said. “He was asking them what he did wrong.”
He said the officers then used a stun gun on Sterling at least once before shooting.
Both got on top of him, and one ordered him not to move.
The one closest to Sterling’s legs yelled “gun,” and the shots followed.

150 people took to the streets of Baton Rouge, Louisiana, on Tuesday following the murder of Alton Sterling by police officers in the US.

According to reports, Sterling was shot outside a convenience store where he was selling CDs.

It is unclear why the cops decided to shoot him. Greys Anatomy actor Jesse Williams recently came under fire after he spoke out about the killings of black Americans by white cops.

Some angry fans asked for the actor to be fired from the show for raising awareness about #blacklivesmatter.

During his moving speech at the BET awards on 26 June, Williams spoke about how white cops were killing black people and not even feeling any remorse for it.

“Now what we’ve been doing is looking at the data and we know that police somehow manage to de-escalate, disarm and not kill white people everyday. So what’s gonna happen is that we are going to have equal rights and justice in our country, or we will restructure their function and ours,” he said.