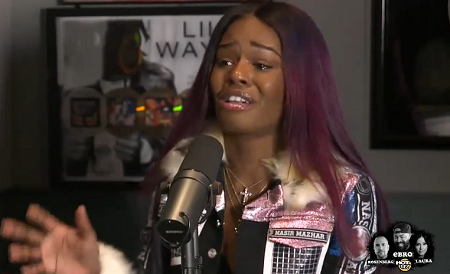 Went In: Azealia Banks Calls T.I. “A Shoe Shining Coon”, Says Iggy Azalea Is Capitalism Stealing Black Culture & More! (Got Emotional And Teared Up). She also talk about she can’t “F**K with these hoes, she is single now. Banks talks about the Grammys and didn’t bite her tongue regarding Macklemore’s shocking wins Kendrick Lamar and Drake. “That Macklemore album wasn’t better than Drake’s record,” Banks told HOT97. “That Iggy Azalea shit is not better than any black girl that’s rappin’ today. The Grammys are supposed to be accolades of artist excellence. Iggy Azzlea is not excellent.” Iggy needs to be in a box with Brittany Spears. Watch interview below and tell us what you think ,Is she trying to stay irrelevant or is she talking some truth?..