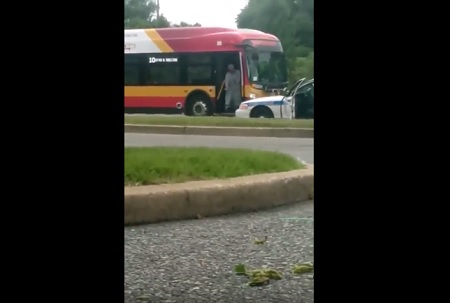 Disturbing Video captured by a bystander shows a man having a shootout with Baltimore County police in Dundalk, MD.

Officers said the man robbed two people in the Logan Village shopping center parking lot, then hopped onto a No. 10 MTA bus.

An officer chased the robbery suspect on foot to a bus at the corner of Dundalk Ave and Belclaire Ave. The bystander who captured the video footage had been a passenger on the bus.

He said the suspect ordered him and the other passengers off the bus. The suspect then opened fire on officers arriving on the scene.

The suspect was killed and a Baltimore County police officer hurt in a shooting in Dundalk, police say.