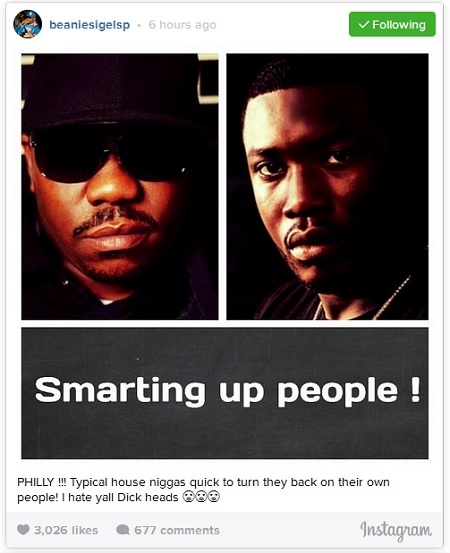 Read Below… Words from Beanie

Now that I’ve got your attention! I think a lot of you are misinterpreting what I’m saying… See this thing bigger than Nino Brown.. First & foremost who really care about Meek & Drake rap beef…That hole situation gay.. Meek said what he said and Drake did what he did !!! Bottom line. .. I’m not choosing sides in none of this shit.. For one I can care less plus it’s none of my business. .. I know ,Why would Meek care if Drake didn’t write his own shit I don’t know.. I’m going to still bang Drake shit just like everybody else is because nobody cares point blank.. I know, why would Meek diss Ar. I don’t know… You have to choose your battles carefully and be prepared for the outcome good or bad.. But this about to move somewhere else beyond rap.. “A wise man don’t learn from his own mistakes ,he learns from the mistakes of other.. I told yall “I go through it so you WOULDN’T do it after me”. .. Somebody mite die over this stupid shit.. it won’t be Ar.,Meek, or Drake.. it’s going to be one of the entourage … Somebody going to move out to prove they loyalty to something that’s not loyal to them “stupidity ” somebody dies somebody in jail for life over what. You’ll be lucky if a nigga get you a lawyer send you some flicks & commissary money for a couple months…good luck on that dark skin Jermaine… But what do I know.. I’m just a washed up rapper right? RIGHT ! .. This the shit that happens when you turn your back on your people… You don’t advise them on what’s right.. You Don’t tell them they acting like a sucker when they doing sucker shit!!! Advice to @ar_ab_32 don’t fall for the banana in the tailpipe & sacrifice something or someone over this gay shit…do your thing and get your money homie.. Advise to @meekmill tighten up your circle, Get them yes men from around you that’s not going to keep it ? when you make a bad decision, because we all do at times. “Gangsters fuck up”… Jay said “it’s a lesson learned even in defeat ! “I’M FOR MY CITY THAT ALL” But like I said I ain’t nobody right. RIGHT! QUIT THE BULLSHIT!!