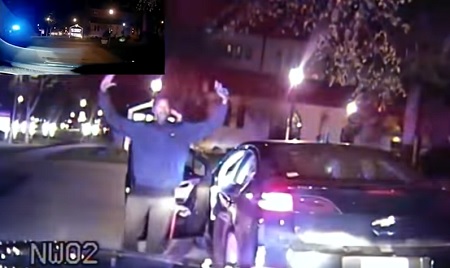 A black man and an engineering doctoral candidate at Northwestern University,
was fixing his car in a suburb outside Chicago on Oct. 10, 2015, when a woman passing by called the police.

Crosby was fixing his own car and then got into his own car and pulled off.
The woman followed Crosby, giving updates to police. Evanston police arrived on the scene around 7 p.m. and ordered Crosby out of his vehicle.

“And in this situation, within 10 seconds of Mr. Crosby getting out of his car with his hands in the air, he was tackled,
he was kneed while he was standing up, then he was punched repeatedly by multiple officers, for allegedly stealing his own car.

Crosby was charged with resisting arrest and disobeying an officer, but a judge threw out those charges, Fox 32 reports. An investigation by the Evanston Police Department found the use of force justified, but the department has made changes to prevent police takedowns of subjects during an arrest.

Crosby filed a civil rights lawsuit against the EPD in 2016, and that case is now pending.