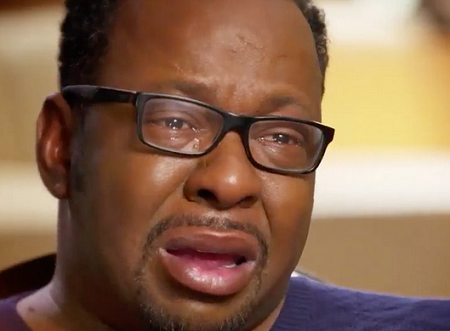 In his first sit-down interview since the death of Bobbi Kristina Brown last July, Bobby Brown points out the shocking similarities between the death of his 22-year-old daughter and that of his ex-wife, Whitney Houston.

Bobby Brown sits down with Robin Roberts for the first time since the death of his daughter Bobbi Kristina, Bobby points out the shocking similarities between the death of Kristina and his ex-wife, Whitney Houston.

This interview with Robin Roberts airs at 10 p.m. on Tuesday, June 7, on ABC, and we will be watching.

Bobbi Kristina died last June at age 22 after being found unresponsive in her bathtub in January 2015. The Fulton County Medical Examiner found she died from a combination of drowning and drug intoxication. A toxicology report found marijuana, alcohol, “a cocaine-related substance,” sedatives, anti-anxiety medications and morphine in her system when she was found.

Despite accepting some blame for himself, added that only one person was around both Houston and Bobbi Kristina near the time of their deaths: Nick Gordon.

Gordon, 26, was Bobbi Kristina’s boyfriend who lived with her at the time she was found unresponsive. He has denied all wrongdoing and has not been charged by authorities in connection with Bobbi Kristina’s death.

Houston took Gordon in when he was just 12 years old and going through a difficult time. Though Houston never officially adopted him, Gordon was raised in Houston’s house and was good friends with Bobbi Kristina before they started dating after Houston’s death.

“Regardless of what everybody thinks, I made Krissy and Whitney’s last few years on earth as happy as they would be,” he said in an April episode of The Dr. Phil Show. “I gave them somebody to trust to, to talk to, to be there, someone genuine.”

You may have missed