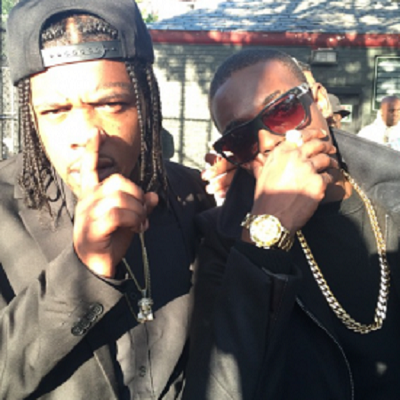 Brooklyn rapper Bobby Shmurda accepted a plea deal last week in his murder conspiracy case for (seven years) he already served 2 years on conspiracy to possess weapons and possession of a weapon as well as GS9 rapper Rowdy Rebel..

Recently Bobby had a exculsive over the phone interview with Complex and explained the big part of his plea deal was to help his boy Rowdy out.

Check it Out Below

Why did you take the plea deal?
BS: I did it for Rowdy. They offered me five and offered Rowdy 12. They said the only way they’ll give him seven is if I took seven too. So, you know, I had to take one for the dawgs.

If you hadn’t taken the deal, how much time were you guys looking at?
BS: The judge wasn’t really playing fair because he was letting a lot of stuff into court that wasn’t supposed to be. The only witnesses the DA had against us were lying cops. We had detectives lying, saying they seen us with guns in our hands, but when everything came back there was no DNA, no fingerprints, no nothing. My lawyer told me we don’t want to go to court in Manhattan with these white people because they’re going to be looking at me, a little black kid. Who are they going to believe, the word of this black kid talking about shooting shit up or the word of white officers? A jury is going to believe cops all day. We’re black kids, these are white people with badges.

Check out the full interview here Via Complex