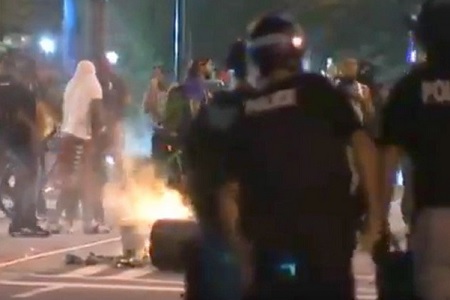 Man Jumped By Charlotte Protesters & A Reporter Is Nearly Dragged Into A Fire By Rioters!
Disturbing videos have emerged of protesters brutally attacking white bystanders in Charlotte as violent demonstrations continued to engulf the city, 48 hours after a black man was shot dead by police.A man was dragged and beaten by a mob while begging for mercy and an unconscious photographer was almost tossed into a fire, and a CNN correspondent was slammed to the ground in the midst of the chaos.It was the second night of unrest following the deadly shooting of Keith Lamont Scott, 43, by African-American cop, Brentley Vinson, 26, at an apartment complex on Tuesday afternoon. Police said 44 people were arrested for a variety of crimes such as assault, breaking and entering, and failure to disperse. At least 11 people, including two cops, were taken to hospital.