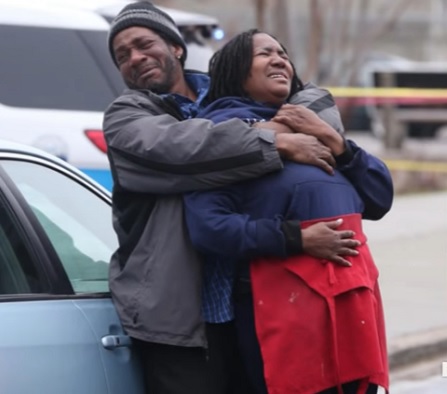 Sad: A Chicago mother witnessed a gunman shoot and kill two of her sons at the restaurant she worked.

The shooting happened Thursday afternoon at the Nadia Fish and Chicken on 75th street and Coles Avenue when an unidentified man walked into the eatery and started firing.

There were a total of four victims; two of whom were brothers.

The Chicago Tribune reported that the boys’ mother Dana Jackson was working when her sons came in to get food and to visit with her.

According to the outlet, the mother, still wearing her work apron, angrily pounded her fists on the hood of a police car and threatened to kill herself because she was so upset.

“I can’t go on, my life is over,” Dana said. “I’m about to goddamn kill myself. I was standing right here in the window, they killed ’em right in front of me.”