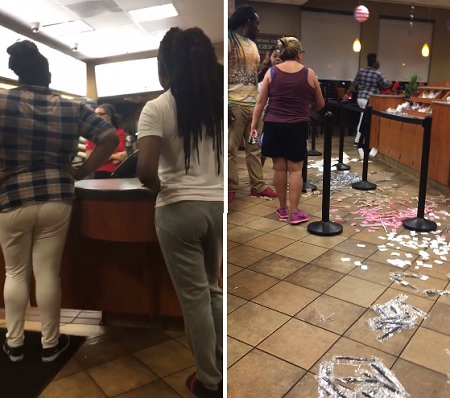 A Chick-fil-A in Florida was trashed on Monday by an unsatisfied customer in the River City neighborhood of Jacksonville, Fla., according to Allison Music,

a witness who shared footage of the ordeal on Facebook.

So I went to Chick-fil-A tonight and we all know I go there all the time… well tonight was a little different. I walk in and this teenage boy is arguing with the workers along with another male. I have no idea what they are arguing about I just know the boy is making a complete fool of himself. This goes on for a good 15 or 20 mins. I still hasn’t gotten my order yet, but already paid. I was letting them deal with the problem. Well not 5 mins later two females come walking up. The manager has already locked to doors so nobody can get in. These females beat on the door trying to bust the glass and pull and jiggle the door handle till the door handle literally breaks off the door. Well they couldn’t get in that way so they proceed to go through the other door.

This one happens to be unlocked. So then they start yelling and arguing with the works. (The manager is on the phone with the police by now.) Every time something goes down I always have it on my phone just in case. Well this can be a learning lesson for us all.
1.) food and money isn’t that important. I would of left if they hadn’t of said we needed to wait till the cops got there before we could leave.
2.) I don’t know who raised these girls but this isn’t getting you anywhere in life. This is very disrespectful on so many levels and any parent should be ashamed to raise children to act this way.
3.) I give kudos to Chick-fil-A for handling this situation in a very reasonable manner.
There were kids at Chick-fil-A while this was going on and anyone should be embarrassed to act the way these two females did tonight. There were kids crying they were so scared. I hope you are satisfied with what you did, because I’m sure these kids will be scarred for life. You handled this situation the sorriest way a person could handle it. You are rude, you are a narcissist, and you shouldn’t be proud of what you did. The only thing you accomplished was making a scene. Other than that you accomplished nothing..
– This happened at the Chick-fil-A in River City.