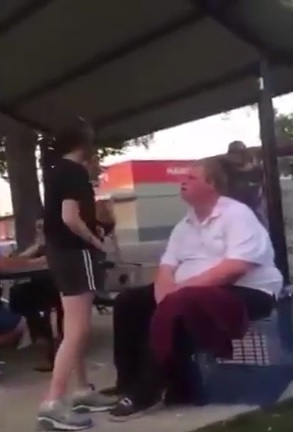 This is totally disgusting video shows a horrible teenage girl attacking a mentally disabled man for no apparent reason until he was unconscious.

Footage showing the 14-year-old girl punching the young disabled man hard in the face and being cheered on her friends.

The teen girl has been later arrested after footage was later uploaded to facebook..The attack took place at Pakenham, south east of Melbourne.

The special student, 18, can be seen sitting on a turned over blue shopping trolley when the teen approaches him. The girl, wearing a t-shirt and shorts, pummels the man’s face with two punches, forcing him backwards and appearing to knock him out.

Offering no resistance under the intimidation of the group, he is punched several times. As the man slumps over showing little movement, the girl walks away checking her knuckles to cheers from her friends.

The perpetrator took to Facebook to defend her actions, but ended up incriminating herself even further after a number of friends captured the incident on their phones and posted to social media, saying: “If it wasn’t me it would have been the boys and they would have done worse than that especially because of the way he was speaking to me so all of you can say s***, go for it, I don’t give a f*** man.”

A person by the name of Dean “was asking her to punch him because he didn’t think he would feel it”.

It is alleged that the teen threw the punches more as a dare, than a case of self-defence as the teen was initially claiming.

Several friends of the girl have alleged that the victim was confrontational after allegedly drinking two litres of cask wine and approached the group of teens. However, several witnesses are believed to have also come forward to dispute this claim.

The teen has since come forward with an additional post to social media, saying: “Yes it was wrong and I know that but he brought it on himself by threatening me, of course I was going to stick up for myself. But, in a last minute attempt to justify her actions, says “I wasn’t going to stand there and be spoken to like that or threatened like that.

In her last known post about the incident, the teen girl went on to say : “He might be disabled but he still knows what’s right and wrong. “Bash me, threaten me, do whatever yeah, I know I deserve it.”

Victoria Police are aware of this additional footage, and have included it as part of their evidence brief against the 14-year old girl. 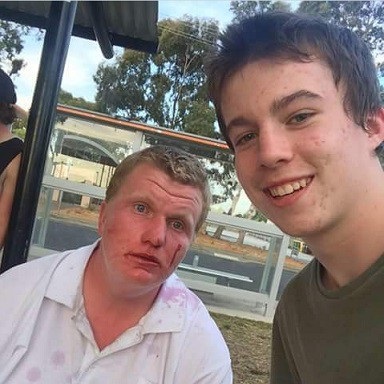