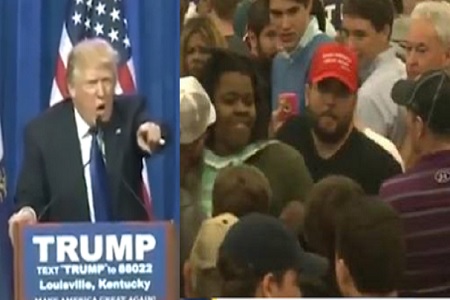 White supremacists appeared to be out in force at a Donald Trump rally in Kentucky yesterday  where they were filmed shoving and pushing a black protester in scenes reminiscent of America’s race struggles in the 1960s.

The female protester in the video, Shiya Nwanguma, says she was subjected to racial slurs as she was forcefully ejected from the rally.

“They were pushing and shoving at me, cursing at me, yelling at me, called me every name in the book. They’re disgusting and dangerous.”

In an article for the New York Daily News, columnist Shaun King wrote he believed the man shown in the video pushing Ms Nwanguma was Matthew Heimbach, a prominent young white supremacist who has been dubbed “The Little Fuhrer”.

Another protester at the Trump rally, Chanelle Holm, told news website Raw Story the atmosphere was “eerie” and reminded her of historical photos from the civil rights movement of the 1950s and 1960s.

“In my entire life I had never had anyone look at me with such hate,” Ms Helm said.

Protesters have been forcibly removed from many of Trump’s rallies and the Republican frontrunner has caused outrage for appearing to encourage violence against them.

“You know what I hate? There’s a guy, totally disruptive, throwing punches — we’re not allowed to punch back any more,” Trump reportedly said last week at a rally in Nevada.

“In the old days, you know what they used to do with guys like that when they were in a place like this? They’d be carried out on a stretcher, folks.”