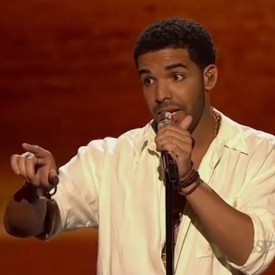 Drake made fun of Macklemore Wednesday night at the ESPY awards.

That’s strange, Usually, rappers stick together through thick and thin, no matter what.

As you may or may not know — because you might have had better things to do — Macklemore and Ryan Lewis dominated the rap categories last January at the Grammy Awards. They won Best Rap Song, Best Rap Performance and Best Rap Album.

After Macklemore’s big night, he sent a text to Kendrick Lamar that he later posted on Instagram, saying Lamar was “robbed” and should have won Best Rap Album.

“To name just Kendrick? That (expletive) made me feel funny,” he said. “No, in that case, you robbed everybody. We all need text messages!” Drake also said Macklemore’s text “felt cheap. It didn’t feel genuine.”