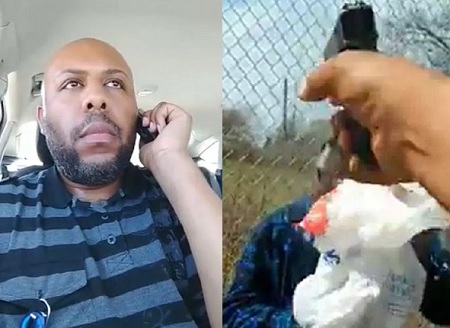 Cleveland police are hunting a man who live streamed himself as he killed an elderly man , and has claimed to have killed 15 more.

Steve Stephens is calling his crime the Easter Massacre and is on the loose in Ohio city, he recorded shocking videos on social media at around 3pm on  Sunday.

The horrifying footage, which police say is real, shows him driving up to an old man in the street and opening fire.

He claims to have killed 15 people on Sunday, but only one death has been confirmed.

Stephens, works a mental health care manager, also wrote that he ‘messed up’ in postings on social media, and blamed the shooting on a woman, believed to be his ex-partner.

He wrote in a Facebook post that the woman is Joy Lane, and that he would only stop if she or his mother called him.

Lane is said to be an Air Force veteran, and he said that the two dated for three years, and he wishes he’d never met her.

In the shocking video, Stephens can be seen driving down the road and he says, “Found me somebody I’m going to kill, this guy right here, this old dude,” before exiting his vehicle. He walks up to the man and begins talking to him, asking how old he is before pulling out a gun.

The man tries to shield himself before Stephens fires once, hitting the man in the head.

The video shows the man on the ground, bleeding as Stephens walks back to his white car, described by police as a Ford Fusion, and drives off. Family members said the victim is a 78-year-old man:

Videos below is very distrubing: Watch with caution