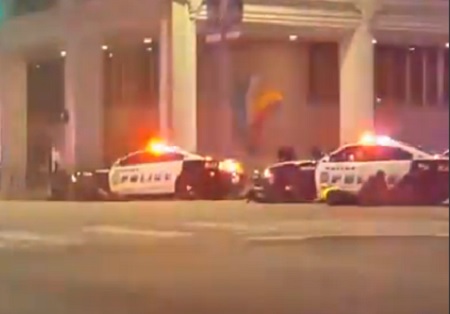 A man named Michael Kevin Bautista was live on facebook during the Dallas shooting that went down on Thursday..

Officers kept watch on a street in downtown following reports that shots were fired during a protest over two recent fatal police shootings of black men.

Four officers have been killed and at least seven more injured in a hail of gunfire during a demonstration organized to protest this week’s police-involved shootings in Minnesota and
Louisiana, Dallas police confirm.
Friends and family told reporters that the man in the photos is Mark Hughes. Despite carrying an assault-style rifle during the march (which is legal in Texas), the man’s relatives were adamant that he was not involved in the shooting.
[Credit: Michael Kevin Bautista]