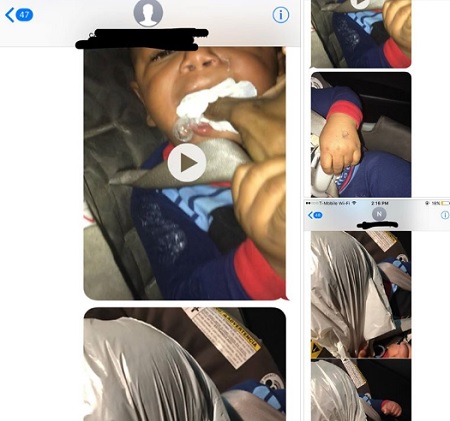 Ra’neicha Broadnax of Richmond, Virginia received videos of her nephew with a plastic bag over his head and cigarette burns to his arms.

The disturbing videos was sent to her phone by her brothers baby mama Janelle Peterkin after he allegedly no longer wanted to be in a relationship with her.

She stuffed the bag in his mouth, then he was throwing up, he was gagging,” said the child’s aunt Ra’Neicha. “She burned him on his hands with cigarettes.”

B*tch better not ever get on social media & post shit else about my brother being a bad father , when she Tryna kill they baby cause he don’t wanna be with her ! Wdf kinda shit is this !!??? Janelle Peterkin crazy B.. THE “HUMBLE,TEXAS” POLICE HAVE BEEN CONTACTED