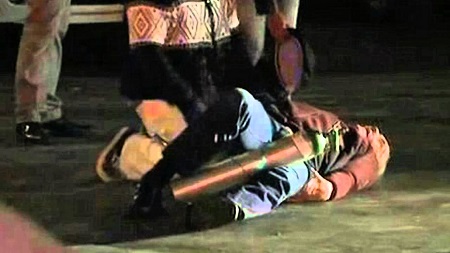 A third nights of protests against Officer Darren Wilson not being charged over the death of Michael Brown has begun as footage has emerged showing an elderly man who run over after two people stole his car in Ferguson during Monday night’s disturbances.
The aftermath of the incident was captured by a St. Louis news crew and shows the chaotic scene in the parking lot of Faraci Pizza.
The victim is shown lying face down on the pavement with his oxygen tank beside him.