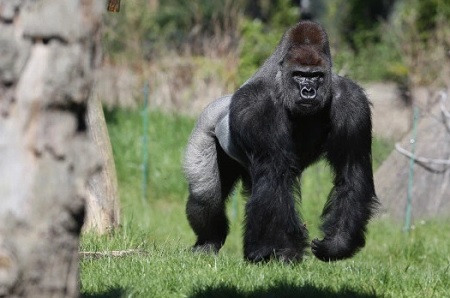 A gorilla at a  zoo in New Orleans throws a block of wood into the crowd, hitting a pregnant woman in the head.

Syliva Cressy, 34 was enjoying her day at the  Audubon Zoo Sunday afternoon when a female Gorrilla picked up a block of wood and threw it out of the enclosure.

The 34-year-old woman was taken to two hospitals for doctors to check both her and her baby for injuries.

Zoo officials says they are examining everything that happened around the incident, including claims by Cressy that she was not given proper care while still at the zoo.  The zoo says it is working to make sure Cressy gets the medical care she needs.

“When it hit me, I kind of blanked out,” Cressy said. “It really took the wind out of me and I fell on my belly. As I regained consciousness, I was just worried about my baby.”

In a statement Tuesday, zoo officials said the block of wood was an “enrichment tool,” filled with honey and raisins for the group of three gorillas who share an enclosure at the zoo.