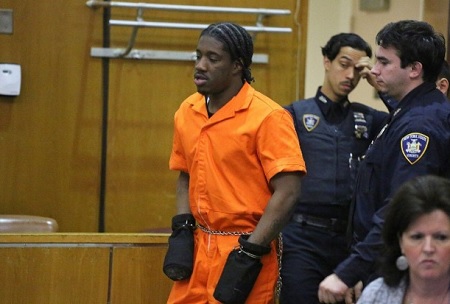 Rashid Derissant, and fellow GS9 member Alex Crandon were jailed and convicted of murder, attempted murder and conspiracy in February a 2013 murder of a 19-year-old rival gang member.

“As indicated by their verdict, the jurors in this trial heard evidence describing a cold blooded murder, wild gunplay and a terrifying disregard for the safety of innocent bystanders as the defendants tried to violently settle scores with rivals in New York City and beyond,” said Special Narcotics Prosecutor Brid get G. Brennan. “When Rashid Derissant and Alex Crandon were armed, theirs was a neighborhood under siege.
When they traveled to Miami Beach, they spread terror as they fired randomly at a nightclub. They took their New York City based grievances and rivalries to Miami,
assuming that they could act with impunity there, claiming they were merely members of a music group.
Their convictions on these crimes make our city a safer place.”
As proven at trial, DERISSANT, aka “Rasha” aka “Jordan 23,” and CRANDON, aka “A-Rod,” were members of “GS9” or “G Stone Crips,” a street crew based in East Flatbush Brooklyn, and conspired to engage in a pattern of gang-related violence between January 2013 and October 2014.
Much of the violence detailed at trial stemmed from an ongoing dispute with members of the rival gang “Brooklyn’s Most Wanted” or “BMW.”
The gang sold narcotics to make money, some of which went towards gun
purchases
Read the Verdict Here: http://www.nyc.gov/html/snp/downloads/pdf/gs9_verdict.pdf