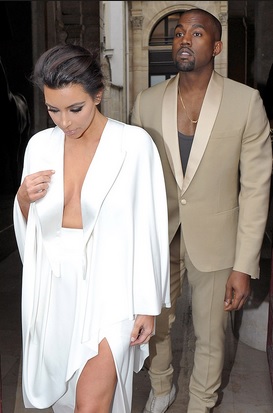 Soo cute: Having everything in the world rapper Kanye West surprises his wife Kim Kardashian with a great Mother’s Day.

35-year-old reality star woke up to a private performance by an all female orchestra at her Calabasas home early Sunday morning .

Kim and her daughter North watched from the balcony as the band played soothing melodies from films such as Disney’s “Frozen” and “Annie,” which the world-famous socialite chronicled in a series of videos on her Snapchat account.

Then later in the day, West arranged for a string quartet to surprise her at a restaurant in São Paulo.

“Every single waiter who brought food said ‘This is from Mr. West for the best mother in the world!'” Kardashian wrote in an Instagram post at the time. “Seriously I have the best husband ever!”