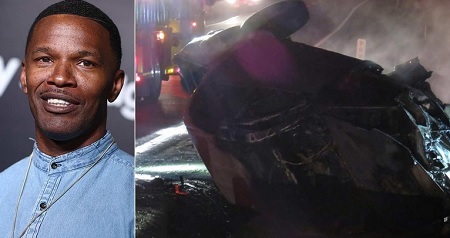 Hero: Actor Jamie Foxx is a real-life action hero after Rescuing a Man From Burning Car.

Yes the comedian/Actor actor rushed to the rescue after a fiery car crash took place outside his Los Angeles home on Monday night.

According to TMZ, a car skidded and flipped and ended up outside Foxx’s gate around 8:30 p.m.

The star reportedly called 911 and then raced to the scene to help. TMZ reports Foxx told police he feared the car would explode so he dragged the driver, who had been buckled in his seat, out of the car and moved him 30 feet away from the vehicle.

Firefighters and emergency personnel reportedly arrived to the scene a short while later.

Foxx’s rep declined to provide a statement from the actor or any further information.