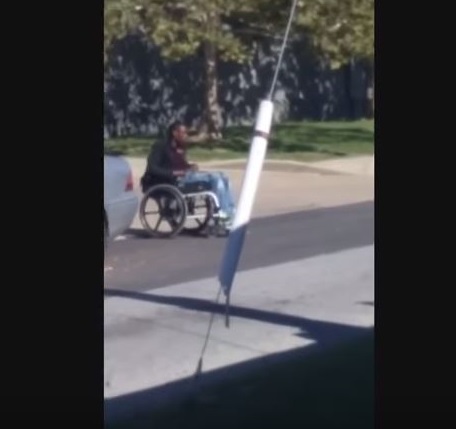 A family in Wilmington, Delaware is demanding answers about why wheelchair-bound Jeremy McDole was shot multiple times. Police officers say he threatened them with a gun, though video suggests otherwise.

In a video of the encounter on Wednesday afternoon, an unidentified officer points his gun at the 28-year-old, yelling “show me your hands!” A shot is fired, but it is unclear who it came from. The officer continues to yell for the man to put his hands up and “drop the gun,” and three more officers arrive for back up, saying “hands up, put your hands up,” with guns drawn. The witness who recorded the video notes that McDole is bleeding. McDole moves his hands around in his lap and appears to put one in his pocket, when the cops fire their weapons at least ten times.

Police say they were responding to a call that McDole shot himself, and that he was still armed with a .38-caliber gun when they arrived at the scene. It is hard to tell what McDole was doing throughout the video, although there does not appear to be a weapon in his hands.