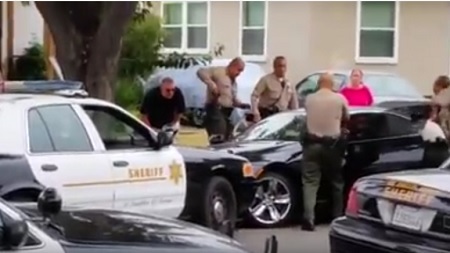 The family of John Berry, a 29-year-old man killed by Los Angeles County Sheriff’s Department in Lakewood, CA, have released video footage of the fatal shooting.
Berry reportedly failed to take medication for an undisclosed condition. Los Angeles County Sheriffs were responding to a call about a man “acting strangely”.
“When deputies got here, the suspect actually drove in the direction of one of the deputies and collided with the first deputy that arrived,” Homicide Lt. Eddie Hernandez told reporters.
Deputies used different levels of non-lethal force attempting to subdue him, “However, at one point the suspect crushed a deputy between his car and one of the radio cars,” Hernandez said. “The deputy’s legs were crushed. Fearing for the deputy’s safety, deputies opened fire and struck the suspect. The suspect was pronounced dead at the scene.”