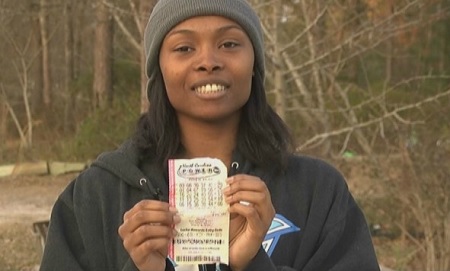 Marie Holmes hit the winning $188 million jackpot, keeping $88 million after taxes, has stuck with her boyfriend through several bailouts now. The couple made headlines over the summer after Holmes posted a total $9 million in bail money for her beau affectionately known as Hot Sauce.

Hot Sauce, real name Lamar McDow, found himself in trouble with the law again after being accused of arranging a street race. He was arrested Tuesday for “violating the terms of his pre-trial release on earlier charges” the New York Daily News writes citing WECT-TV. According to WECT-TV sheriff’s office officials reported those terms involved McDow wearing an ankle bracelet that limited him to only going to his house, work, church on Sundays, to see the doctor, and to court. The GPS tracker showed he was elsewhere and so he was arrested.

Holmes, who has vehemently said McDow is not a “drug dealer” bailed him out for a third time in October the New York Daily News notes. WECT reported local attorneys as saying bail bond amounts increase when pre-trial terms are broken.

“You gotta be kidding me”, First off why is his bail so damn long a person with a Murder charge bail isn’t even that high his ass would of stayed in jail if it was up to me.