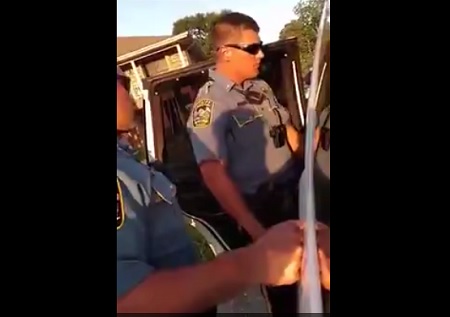 So this is what officers are saying happened in the video that went viral:
A Mother called the police for help because she feared for her life after finding out her son, Christopher Verdin Jr., was on Crystal Meth and wanted more.
She said that Verdin also pulled a .45 caliber handgun from his waist band and fired two shots at the dog that was very close to her. The mother locked herself inside of the residence and said that Verdin left walking.

Deputies responding to this call located Verdin walking in the 7100 block of Grand Caillou Rd. which is approximately ¼ of a mile south of his home. Verdin was handcuffed and taken into custody. During the search of his person deputies found the .45 caliber handgun described by his mother. The handgun was recovered from the waistband of his pants along with an extended magazine.