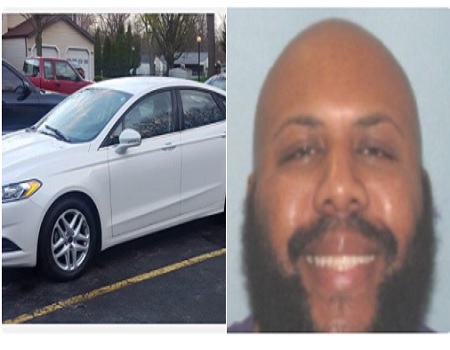 A manhunt was underway late Monday morning across five states for Steve Stephens, the alleged facebook killer who was seen on video murdering a complete stranger while live-streaming.

Steve Stephens cell phone might have given up his location to cops, Police confirmed that they picked up a ping from the suspect’s phone on the east side of Erie County.

He’s been charged with aggravated murder after killing 74-year-old Robert Godwin Sunday in Cleveland, and uploading video of the fatal shooting.

Detectives initially made contact with Stephens via cell phone after the incident was posted,
but they were unable to track him or convince him to come in.

Police believe he’s left Ohio and may be in Pennsylvania, New York, Indiana or Michigan. An aggravated murder warrant has been issued for him.

He is 6-feet-1-inches tall and 244 pounds. Stephens was last seen wearing a dark blue and grey or black striped polo shirt.

He is driving a white Ford Fusion with Ohio temporary plates, E363630.