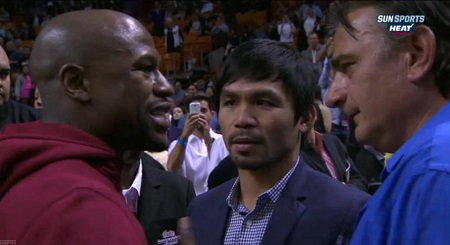 Boxing superstars Floyd Mayweather and Manny Pacquiao moved closer to agreeing a mega-fight after meeting at a basketball game in Miami and agreeing to start negotiations over a $200m bout.
Mayweather went over to Pacquiao at half time of the Miami Heat vs Milwaukee Bucks game and the pair shook hands and chatted briefly, then exchanged phone numbers.
Pacquiao said: ‘He gave his number to me and said we will communicate with each other.’
Mayweather and Pacquiao have never met in person before, but when asked to clarify if the exchange meant the two would negotiate directly about meeting in the ring, Pacquiao said that was the case.
https://www.youtube.com/watch?v=vJuzCRLLIKs

Mayweather and Pacquiao sealed the deal. Shook on it. Exchanged phones and typed in each others’ numbers. pic.twitter.com/A1Fv18xQXj