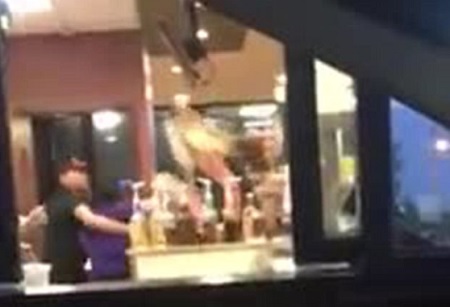 Video captured a woman McDonald’s customer jumping Over the counter to fight workers on Saturday at a Des Moines restaurant.
Two men and a woman ordered McChicken sandwiches about 9 p.m. CT, but apparently were hungry and upset about the wait time, according to a police report. The employees told police the woman came to the counter and started yelling that she wanted either her food or her money back.

“Give me my (expletive)!” the woman is heard shouting in a video recorded by another customer.

The heated, profanity-laden argument continued between McDonald’s staff and the woman, the video shows. The manager is seen handing the woman a McChicken sandwich she ordered, but the woman rejects it and throws the chicken sandwich back in her face.

Two men with the woman soon approached the counter and an employee attempted to dial 911, but the woman knocked the phone out of her hand and then punched her, the employee told police.