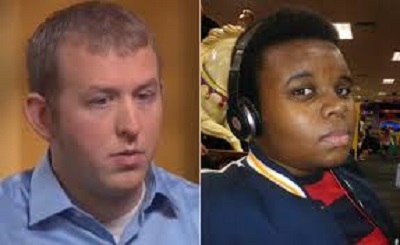 The Missouri cop who killed unarmed teen Michael Brown has resigned from the Ferguson police force, his lawyer confirmed Saturday.

Darren Wilson, 28, turned in his badge five days after a grand jury decided not to indict him in the Aug. 9 slaying of 18-year-old Brown.

“I’m resigning of my own free will,” Wilson told the St. Louis Post-Dispatch. “I’m not willing to let someone else get hurt because of me.”

He said leaving the force was “the hardest thing I’ve ever had to do.”

But area residents said Wilson got off easy.

“Darren Wilson should be in prison,” said Tracey Williams of nearby Bellefontaine. “I think a lot of people are angry. They’re not satisfied.”

Wilson, who was a Ferguson cop for six years, told the Post-Dispatch he’s not receiving a severance package.

“It is my hope that my resignation will allow the community to heal,” he wrote in his resignation letter.

Late Saturday, cops, National Guard members and about 100 protesters peacefully took to the street outside the police department.

“I have a duty to keep her safe,” Stuart Slavin, 57, said of his daughter Natasha Slavin, 17. “The resignation is almost irrelevant. … This is about the next Mike Brown.”

The Missouri cop who killed unarmed teen Michael Brown has resigned from the Ferguson police force, his lawyer confirmed Saturday.

News that Wilson quit came a day after Brown’s father received encouraging words from a man who knows exactly what he’s going through — Trayvon Martin’s dad.

Michael Brown Sr. and Tracy Martin met Friday at a Miami Gardens, Fla., prayer vigil for the two black teens, both of whom were unarmed when they were shot dead.

“I just tried to encourage him and let him know that God has his hands on the situation, and he’s gonna be OK,” Martin