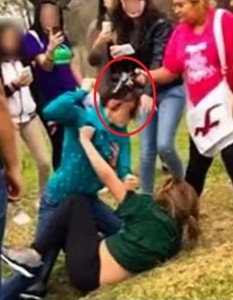 MOM BRINGS A GUN TO HER 14-YEAR-OLD DAUGHTER’S FIGHT AND PULLS IT ON HER RIVAL! So this Mom brought a gun to a fistfight. Texas-style justice went too far when a mom tried to sway a playground fight between her 14-year-old daughter and a rival by pointing a handgun at the head of the other girl, video from the incident shows. Hours after the Tuesday girl fight at a park next to Pasadena High School in suburban Houston — broken up by campus police — Viridiana Alvarez, 33, was arrested and charged with aggravated assault with a deadly weapon after photos and video emerged of the gun-toting mom, Click2Houston ,The teen confrontation was reportedly a grudge match over a boy where one girl challenged the other to a fight after school. Both showed up — along with the pistol-packing Alvarez. Ted Myers, the father of the other girl involved, said he had no clue anything was amiss until he saw the footage of Alvarez pointing a gun at his daughter.”I literally, my stomach dropped,”myers told KHOU” “I got nauseous and shaky.”Alvarez claimed the gun wasn’t loaded and she carried it in her purse as intimidation She told a judge she only planned to “scare her,” according to Click2Houston. Both girls were suspended until Monday by the school and ordered to take part in a five-day guidance program, KHOU reported. Alvarez remains in Harris County Jail on $35,000 bond.”I don’t think a grown woman should be taking a gun where kids are,” the victim’s grandmother told Click2Houston.