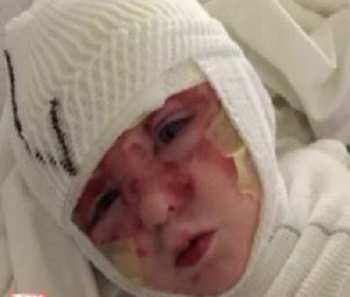 A 25 yr old woman and her 51-year-old mother faces serious charges of child abuse and neglect after  the younger woman poured e hot water on her 2 year old baby girl.

Born January 20, 2012, suffers second-degree burns on 12 percent of her body, including her face and back. The girl was brought to the hospital on Saturday,December 13 at about 9:30 p.m., over 24 hours after the abuse occurred.

A child services investigator says the victim twice told her “Mommy is mean,” and stated that the bathtub water “did it.” She told the case worker that the water was in the blue bucket and that “Mommy did it.”

According to the probable cause document, police began investigating Katie Grimes, 25, after the child’s grandfather was not allowed to see the child when he and his wife picked up their son’s other three children.
Katie Grimes, 25, and Karen Wynn, 51, face charges of child abuse or neglect in Jackson County.

During their visitation with the grandparents, the two older grandchildren told their grandfather that their baby sister had been burned with hot water.

The children are quoted as saying that the child “screamed really loud” when Grimes changed her clothes.

Jackson County prosecutors say the grandparents returned to the children’s home, located near Highway 291 and 24 Highway. When they asked about the burns, they say Grimes told them “it’s bad, but it’s none of your business.”

Grimes’ account of what happened to her daughter has been inconsistent, police say. At first Grimes told case investigators that while cleaning her apartment on Saturday, she filled two small trash cans half-full of hot water with industrial bleach and put them in the bathtub.

She said she left the room but then heard the victim screaming. When she returned, Grimes said she saw her daughter had poured the water on herself. She said she put some ice and antibiotic ointment on the burns.

In a later conversation, Grimes told police that the child was actually burned at about 9 p.m. on Friday, December 12. According to the probable cause statement, Grimes told police she gets frustrated sometimes and when asked if the frustration gets the best of her, she said, “yes.”

Karen Wynn is also charged with abuse and neglect for failing to report the burns. According to the probable cause document, when officers went to Katie Grimes’ home, police say Grimes’ mother, Karen Wynn, answered the door. She told police Grimes woke her up at 7:30 a.m. on Saturday and told her the child had poured hot bleach water on herself.

By mid-afternoon, Wynn says the girl’s eyes were almost completely swollen shut. She told Grimes she should take her to the hospital, but Grimes refused.

Neither Grimes nor Wynn called 911. Wynn also initially told detectives she was not present when the incident occurred, but then amended her statement to say she was present.

Wynn told detectives that in retrospect, any reasonable person would have called 911. Wynn says she was afraid to call because of a previous investigation by the Children’s Division.

On Tuesday, FOX 4 spoke to the uncle of Kaylynn Koehn, Scott Lungren. He said when the little girl was just an infant, she and her siblings were taken away from Grimes, who just recently regained custody just a few months ago.

“There’s no way that her mom should ever be in her life again,” said Lundgren.

Lundgren says the normally bright eyed, bubbly child has lived the majority of her life with his family, and now it is hard to see Kaylynn like this.

“She calls me dad to this day and I feel the same way about her,” he said. “How someone could do this is just amazing. There’s not even words for it.”