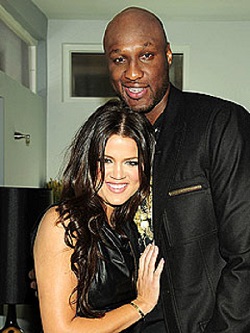 Former basketball star and ex.husband of Khloe Kardashian, was rushed to a  hospital in Las Vegas on Tuesday after he was found Unconscious in a Nevada brothel.

Odom, 35, who played Basketball with the Los Angeles Lakers in 2009 and 2010, experienced a “medical emergency” at the Love Ranch, a legal brothel in the town of Crystal, Nye County Sheriff Sharon Wehrly confirmed Tuesday night.

Odom had been taking what Dennis Hof, the brothel’s owner, characterized to NBC News as “herbal Viagra,” and “he was taking a lot of it.” But no illegal drugs were found in Odom’s room.

Odom, who checked in on Saturday, was found unconscious around 3:30 p.m. (6:30 p.m. ET), according to Hof, who also owns the famous Moonlite Bunny Ranch featured in the HBO series “Cathouse.”

Respect to Kobe Bryant who reportedly left the game last night to be by Lamar Odom’s side.

We send out our Prayers for Lamar

Update**Lamar O is in a coma and his heart is failing…Sources say  Odam is also having serious problems with his Kidney and lungs as well. Khole Kardashian and others are by his side