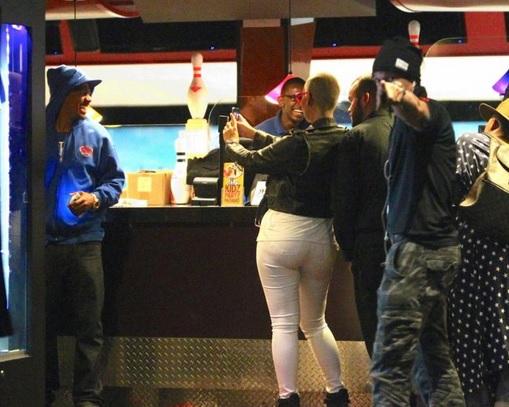 Nick Cannon and Amber Rose have caused quite a lot of chatter about what their relationship truly is.

While the “America’s Got Talent” host has insisted they’re just friends and he’s managing her career, the pair has been spotted out together several times.

They were recently seen hanging out at Pinz Bowling Center in Los Angeles on Tuesday with Blac Chyna, Kim Kardashian’s bestie, for singles night.

Although Amber and Cannon were surrounded by their respective entourages, they were seen chatting privately after a game of bowling.

With both newly single — Cannon and his wife of six years, Mariah Carey, called it quits in August and Rose filed for divorce from Wiz Khalifa in Sept. after 14 months of marriage — the rumor mill has been spinning about the nature of their relationship.

Still, Cannon continues to deny there’s anything more than a strictly business relationship between them.