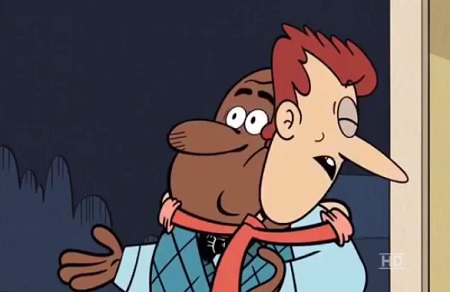 Would you let your children watch this cartoon? Nickelodeon’s animated cartoon series Loud House will feature a same-sex married couple.

A Nickelodeon show is making network history after introducing its first ever bi-racial gay couple.

The couple will appear on The Loud House, a cartoon which centers around the life of Lincoln Loud and his ten sisters.

On the July 20 episode, the couple, Harold and Howard McBride – voiced by Wayne Brady and Michael McDonald – are taking their son, Clyde McBride, to a slumber party at the Loud house.

The two children are speaking on walkie talkies as young McBride heads over to the Loud household.

The show’s innovative scene is heralded by Loud telling McBride: ‘It’s time to make history!’ just as the McBride parents ring his doorbell.

The scene focuses on how McBride’s parents are extremely overprotective of their son and shows them handing Loud a sleeping bag, pajamas, a white noise machine, a humidifier, a dehumidifier, earplugs, inhaler and so on.

Mr. McBride even hands his son a photo of himself and his partner and breaks down in tears after realizing he won’t be able to tuck him into bed that night.

The amusing scene makes no fanfare about the couple’s sexuality but instead draws attention to the couple’s cautious nature.