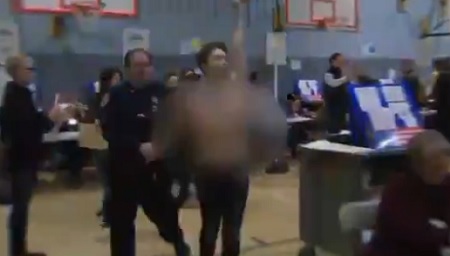 Tiffany Robson of Seattle and Neda Topaloski of Montreal were detained Tuesday morning after crashing the Republican presidential candidate’s polling center in Manhattan.

The two female Trump protesters showed up topless with pants with no tops, and had writing on their chests and backs while chanting at P.S. 59, at 233 E. 56th St.. around 8:20 a.m.

Trump is set to vote at the Midtown East location around 10 a.m., according to CNN, and there was no indication he was there during the protest.

Black writing on one woman’s chest stated, “Hate out of my polls,” and on the second woman, “Trump grab your balls.”

Writing on the back of both women stated, “FEMEN USA.”