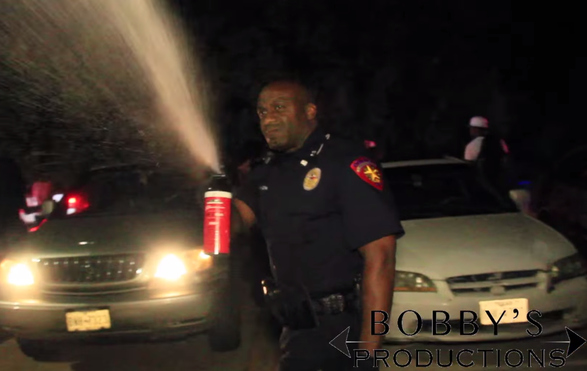 A Texas police officer has been placed on leave after footage surfaced on the Internet appearing to show him pepper spraying a student without any provocation.

According to KTRK-TV, police responded on the night of October 6 to a disturbance call in Waller, Texas.

Mass communications student Bobby Hall, who studies at Texas A&M University, decided to do what he’s trained to do — pick up his camera and begin recording.

“Yeah, it’s what I do,” the aspiring photojournalist explained to KTRK. “I was just filming, using my First Amendment right.”

A Waller, Texas, police officer is being investigated after he nonchalantly pepper sprayed a college student for no apparent reason.

Officer Adolphus Cannon is on paid administrative leave while the Waller County District Attorney’s office and the Texas Rangers investigate his use of the pepper spray.

Officer Cannon was caught on camera pepper spraying Bobby Hall, a student at nearby Prairie View A&M University. Cannon was at an apartment complex responding to a disturbance call when he sprayed Hall. Hall, a communications major, was standing by and filming Cannon and other officers when Cannon suddenly shot him with pepper spray.