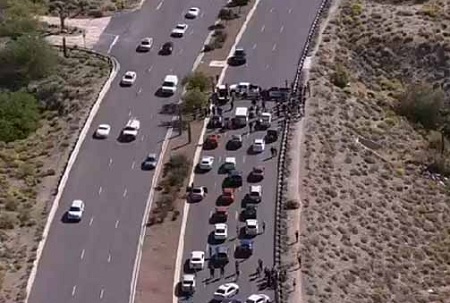 Protesters stopped vehicles in the middle of the road leading into Fountain Hills in advance of Donald Trump’s campaign stop Saturday morning.

Traffaic was backed up for miles by Trump protesters who held up signs reading  “Dump Trump” and “Must Stop Trump ” and chanting “Trump is hate”.

Protesters were chanting, “Donald Trump, shut it down, Phoenix is the people’s town.”

The disruption occurred well after large crowds lined up to get into the Fountain Hills rally. Maricopa County Sheriff Deputy Joaquin Enriquez said officers will ask the protesters to move and if they don’t comply, they will forcibly remove them.

Earlier in the morning, protesters were lining up in Phoenix in advance of Donald Trump’s appearance at a campaign event at the Phoenix Convention Center.