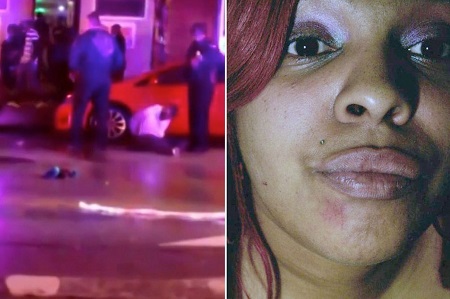 Video of the March 30 melee surfaced online this week. Police erased the 135-second recording from the woman’s phone, but it was recovered from her cloud account, according to the Circuit Court for Baltimore City lawsuit (PDF), which seeks $7 million.

Kianga Mwamba was driving home from a family gathering in March. Stopped in traffic, she began filming the nearby arrest of a man who she says was kicked by police.

“You telling me I can’t record,” the woman says on the video as police tell her to move on.

The lawsuit comes as at least one state, Illinois,moves to ban the recording of the police amid calls across the nation for cops to be equipped with body cameras to help prevent future police scuffles resulting in deaths. President Barack Obama has also weighed in on the issue, announcing last week that the administration would provide $75 million in funding to police departments to purchase body cameras. Even before Obama’s announcement, local police departments were gobbling them up as fast as they could in the aftermath of the Ferguson, Missouri death of Michael Brown.

Mwamba was arrested on charges of assault for allegedly trying to run over two officers. Charges were dropped, and she suffered cuts and bruises.

At the end of the tape, an officer says, “You a dumb bitch, you know that?”

“You just tried to run over an officer,” the officer responds.

While in custody, she gave her phone to an officer to show the video that she didn’t try to run over anybody. The video was allegedly erased from the phone in what her attorney, Joshua Insley, described in a telephone interview as a “coverup.”