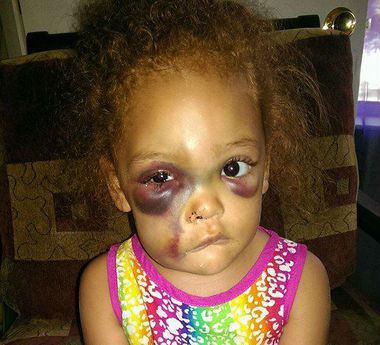 This is a sad story for AvaLynn while justice is being read around the world for the 5 yr old who was injured in a playground accident  on Aug. 26 when she returned home from school  with a swollen eyes, and cut face from injuries at Arlington Elementary school

Her mother Lacey Harris said that another child in AvaLynn’s class had assaulted her and her  daughter was “kicked multiple times in the face until she fell off the slide.” She set up an online account on her Facebook page called JusticeforAvaLynn,

Her Facebook page had more than 88,000 likes by Tuesday afternoon and the GoFundMe.com site, with 4,600 shares, had almost reached its goal of $10,000 on Tuesday night.

City police are now investigating the playground incident, interviewing 4 adult witnesses and the superintendent is declining interviews until both investigations are complete.

People expressed concerns such as a lack of police involvement and the possibility of bullying going unpunished.

But based on what Harris said in the police report, “it wouldn’t be a criminal investigation,” Johnson said. “If a 5-year-old injures another 5-year-old, that’s not a criminal act.”

He said the state Department of Human Services is participating in the investigation and will be doing comprehensive follow-up interviews.

The Pascagoula School District confirmed a child was injured on playground equipment, but said Tuesday no other children were involved.

It said the matter has been turned over to its insurance company “for further handling.”

The school district said it interviewed four adults who were present at the time to determine that AvaLynn wasn’t kicked on a slide.

Debbie Anglin, Pascagoula schools spokeswoman, said the schools have security cameras, but there are no cameras on the playgrounds. Pascagoula residents have started a petition to address that issue.

Anglin did not dispute the incident happened on the playground, and said, “The parent was contacted and the student received medical treatment.”