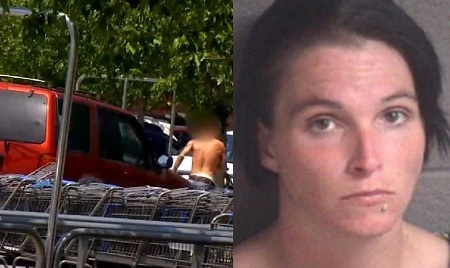 Around 12:30 p.m. footage was captured showing a Asheville, North Carolina pregnant woman running over a man in a  Walmart parking lot

after she claimed he attempted to steal her purse.

According to WLOS, the woman, Christine Braswell, saw the man rummaging through her vehicle. When witnesses confronted the man, he ran away with her purse.

After Braswell gave chase by foot, she got in her car and drove into the man. The unidentified man suffered from minor injuries, and is expected to be okay. He was charged with felony breaking and entering.