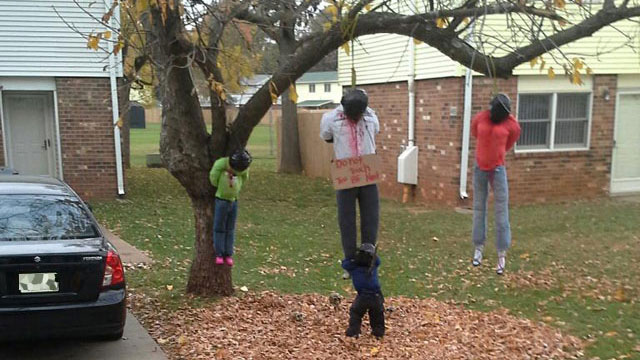 A photograph of the display, which was set up at a residence on the base that straddles Kentucky and Tennessee, was sent to Army officials for investigation.

Authorities at the base said the occupant, who was not identified, told military officials the display was not intended to be offensive and agreed to take it down.

A photograph of the outdoor display published by ClarksvilleNow shows three figures, stuffed with leaves or other material, with black trash-bag faces hanging from a tree in the front yard of a home on the base.

Two of the figures appear to be adults, one of which has an illegible sign hanging around its neck, while the third appears to be a child.

A fourth child-sized, black-faced figure is standing beneath one of the adult figure, as if attempting to render aid.

Military officials said the display was removed because it could be interpreted to be offensive.

They said the occupant apologized for the display, and no disciplinary action was announced.

“Displays of an offensive nature are not reflective of Army values and the family-friendly environment provided for employees and residents of the Fort Campbell community,” said Brendalyn Carpenter, a spokeswoman for the base.

The right-wing Modern American Revolution group denied the display was racially motivated, claiming in a Facebook post that the Public Affairs department confirmed it depicted a scene from the 2012 horror movie, “Sinister.”

“In it, a WHITE family had been killed by their possessed child,” the group posted. “So, anyone who tries to say this is racist is wrong. Since the gentleman is an active duty soldier living on a federal military installation, he has no 1st Amendment rights. Living on post is VERY different than living off post. …End of story!”