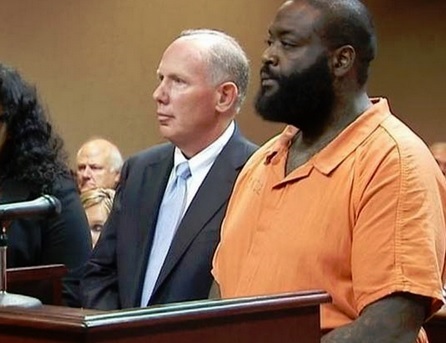 Rapper Rick Ross was arrested last week for felony charges kidnapping and assault after he allegedly pistol-whipped his groundskeeper, and held him against his will.

Rozay was denied bail and returned to Georgia jail for the past seven days.

Today, he appeared in front of a judge with his lawyer, reportedly to make another attempt at being granted bail. The ruling hasn’t come down yet, but it may be an uphill climb for Ross. In addition to the charges pending against him, his victim, the groundskeeper, reportedly suffered injuries so severe he has to be fed through a straw.

The Miami rapper, sitting solemnly behind his attorney, watched as a judge agreed to accept Ross’ infamous Holyfield estate and $1 million in cash in exchange for his temporary freedom.