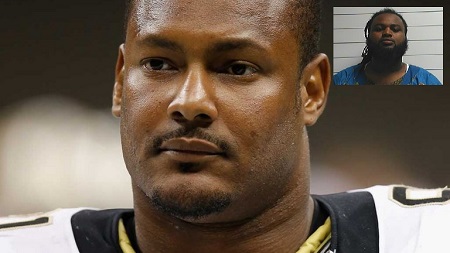 The Queens-born Smith, whose Saints legacy includes a 2009 Super Bowl win, was killed following a three-car crash in New Orleans that led to gunfire, according to authorities.

A man driving a Hummer H2 rear-ended Smith’sMercedes Benz SUV around 11:30 p.m. The driver and Smith exchanged words, and the driver then pulled out a handgun and opened fire, police said.

Smith, 34, died on the scene from multiple gunshot wounds. His wife, Racquel Joseph Smith, was hospitalized after two bullets struck her leg.

The shooter stayed at the crime scene until police arrived and arrested him.

Cardell A. Hayes, 28, was charged with second-degree murder for the shooting. He is a former New Orleans prep football player who was once seen as a rising star, but appears to have never been recruited and was wallowing in dim prospects, according to his online profiles. He apparently appeared as an extra in the hit comedy “22 Jump Street” during a football game scene.

Hayes hadpleaded guilty in 2014 to illegal carrying of a weapon and drug paraphernalia, and was sentenced to six months probation, court records show.

Get The Full Story Here: http://www.nydailynews.com/sports/football/smith-saints-player-killed-new-orleans-article-1.2595020