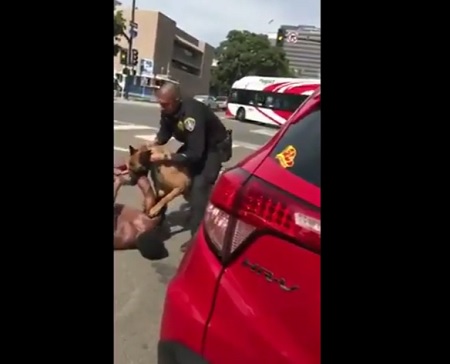 Disturbing video shows the moment three officers allowed a K9 dog to maul a man’s arm while he lays face down on the ground.

Via NYDailynews San Diego, California police handcuffed a suspect who was left with a open wound after the K9 brutally bit him – as officers didn’t utter a single command word to stop the attack.

Angel Nunez, captured the incident on his way to work, and posted the video to Facebook.

‘There is something definitely wrong with this picture. The officer doesn’t seem to have the proper training. Also that dog is not well trained.’

The attack unfolded on Monday afternoon. While many believed the suspect may have provoked the dog, a commenter posted a video of how the incident initially unfolded seconds before Nunez’s clip.