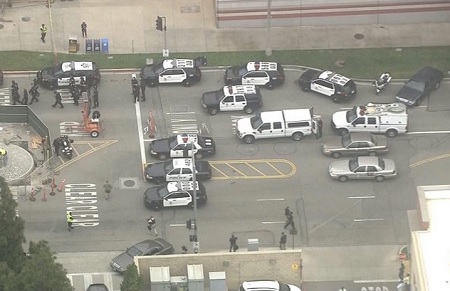 Two people were injured in a shooting at UCLA on Wednesday morning, according to a university spokesperons.

The campus was placed on lockdown just after 10 a.m., as police searched for the gunman, according to the university.

People are being asked to shelter in place in an engineering building on the campus, the university said.

Helicopter news footage showed students walking out in a line with their hands above their head, as armed police officers scoured the campus.

According to the Daily Bruin, the shooter was wearing a black jacket and black pants.

Mehwish Khan, a 21-year-old psychobiology student, took cover in the library along with several other students.

“Everyone was very confused. We got in a building, and no one knew what was going on,” she said.

As she spoke by phone, she started hearing helicopters hovering overhead.

“A lot of people thought it was a joke or a drill,” she said.